My stay at Amma’s ashram

A flashback to my stay at Amma’s Ashram:

Known as the “Hugging Mother,” or simply, “Amma” (“mother” in the south of India), Mata Amritanandamayi Devi is a spiritual leader based in Kerala, India famous for using hugs to reach and comfort people. In fact, Amma has hugged more than 30 million broken souls around the globe – sometimes her hugging sessions last for over 20 hours! While many praise her as a saint for her seemingly unlimited compassion and charity work, devotees themselves see her as something else: God. Krishna, to be specific.

I was not aware of this when I entered the ashram. In fact, all I knew was that Amma was a famous hugging guru who had lots of followers throughout the world. But as I entered the rose-coloured high-rise, surrounded by thousands of people dressed in white, I knew I was in for quite a trip.

Jessy and I first signed in and dropped our bags off in our assigned room.

Our room was as basic as you can imagine: a mattress on the floor, two on little racks. Cement everything. No adornment of any kind. Dingy but clean. Couldn’t open the windows so it resembled a prison cell. We shared the room with an interesting Italian man, named Marino, who could barely speak English. 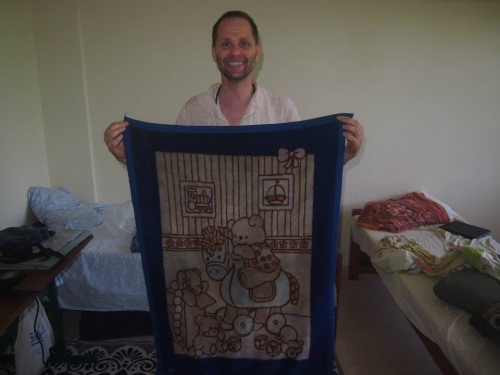 Once settled, we began to explore the place. With its famous massive pink skyscrapers, Amma’s place isn’t your typical ashram. The devotees strongly encourage visitors to watch a video about Amma, which provides a background of her life and the ashram, and then they provide a tour of the area.

Amma, like many who find success without being born into it, can trace her current prominence not merely to her natural charisma but also to her savvy at harnessing it on a large scale. Her ashram in India, for instance, built on the land where she grew up, was once little more than a few huts; today it has evolved into a kind of city unto itself, with soaring high-rises, some 5,000 permanent and semi permanent residents, and up to 15,000 visitors on a busy day. It is enormous, comprising various buildings, a gorgeous temple, health care centre, medical research facility, bank, cafes, restaurants and a souvenir shop. A university and a hospital exist in her name in the adjacent village, which the ashram now spills into. She has used her prominence to start a network of charities, called Embracing the World, which focuses on providing food, housing, education and medical services to the impoverished.

The “mother of all” does indeed seem like a saint – she has dedicated her life to serving others and spreading the message of compassion and caring.

Karma Yoga is the main emphasis at Amma’s ashram. Karma yoga basically consist of entirely selfless service, in which the Ego is given up to the desire to serve the devine in every thing, be it man, animal, plant or an inanimate object. Essentially, everything we do– from household chores, like washing the dishes, to “important” duties, like our job–becomes a way of nourishing the universe that nourishes us.

Everyone at the ashram has a duty to offer at least two hours of service each day. Many offer at least a few extra hours daily. Thanks to the dedication of residents and visitors, the entire center is completely volunteer run.

Posted on a large board in the centre of the main hall of her ashram, there is a quote from Amma’s which reads, “In this age of selfishness, selfless service is the only soap that truly purifies”. I couldn’t agree more.

Amma was at the ashram during my two week visit and I was able to experience the “darshan”, Amma’s famous hug. Inside Amrita Hall, as the modest A-frame structure is called, Amma is surrounded by a dense, undulating throng. Clad in a billowing white sari, her rotund figure is perched atop her dais, a cushy throne draped in garlands and strewn with rose petals. A sly, benevolent smile spreads across her face as she pulls one person after another to her bosom. This is what she does nearly every day, breaking for only a few hours in the afternoons, and going until three, four, five in the morning. Her stamina is a point of reverence among her “children,” as devotees refer to themselves, more than a few of whom are sitting on the temple’s open floor in the lotus position, watching the proceedings projected on a massive screen hanging from the ceiling, tears streaming down their faces.

Trying to go see Amma is like trying to get on the hot new ride at Disneyland. You need to get special tickets, called tokens. You are herded through various lines by volunteers wearing all white, with red scarves around their necks. You are plastered with a sticker to let people know that you are a new huggee. You are told that the sticker is your pass to “push your way through” to the front of the line when it comes time to get your hug.

Sticker or no sticker, receiving the hug is not without its wait. I queued for over three hours to meet the “hugging saint”. Eventually, it’s my turn. The chaos around Amma is unnerving, a chaos she seems immune to, but as she pulls me into her arms something happens: All goes silent and peaceful, like closing the door to a party, and I wonder if this sudden jolt, from chaos to calm, is at least part of the hug’s appeal. At one point Amma breaks from her embrace and stares into my eyes, and then pulls me in again, tighter, this time whispering something in my ear that I can’t quite understand, “Mamma Mamma Mamma”. The thing people say about great politicians, about how they provide you with the sense, however illusory, that you are all that matters – Amma has that. I feel better than when I entered her arms, there’s no denying that much, yet like coming down from a high, this euphoria fades quickly, especially once I rejoin those in the post-hug pool around Amma. 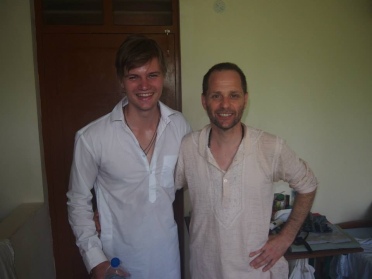 Another highlight of the ashram was meeting so many incredible travellers from all around the world. The people I hung out with at the Ashram were cool, from the fully switched-on swamis who emanated ochre kindness and westerners basically like me; lost, lonely and hollow, disillusioned with the religions of the west – materialism, consumerism and individualism, certain that there must be something more. Amma’s ashram is where I happened to meet my dear German friend and travel buddy, Viktor, who was finishing a seven week intensive panchakarma (Aryurvedic) treatment attempting to resolve long-standing mental health issues caused by a self-abusive history with drugs. (try to add a link here to his blog if he is continuing with it)

As a great bonus to this exhilarating and unusual experience, the best coffee I’ve had in India was at the ashram in a little outdoor espresso bar serving fresh cinnamon rolls. Coffee therapy – the soul rests when the mind is at ease. 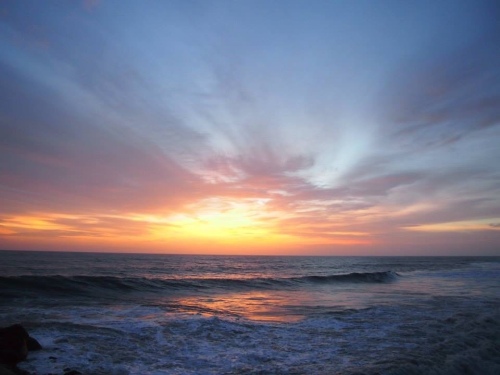 What Amma has intuited, or was born knowing, is that everyone wants to be loved and that everyone is worthy of love. Like a Mother she loves unconditionally and serves expediently.

What she demonstrates, we in our loveless social structures are scrabbling to discard. In Amma we have an example of what can be achieved if we build upon the principle of love. Throughout our crumbling culture there is fear, desire and anger and more and more, we all need a hug, the solution to our spiritual sickness might be simple, we can start to change the world by loving each other.